Bollywood actor Nana Patekar ​visited the family of actor Sushant Singh Rajput at their Patna residence on Friday and offered his condolences to the bereaved family. He was seen paying his tribute to the late actor by folding his hands in front of Sushant’s portrait.  Sushant Singh Rajput died at his residence in Mumbai. His detailed post-mortem report has confirmed that he died by “asphyxia due to hanging.” The report was analysed by a team of five doctors 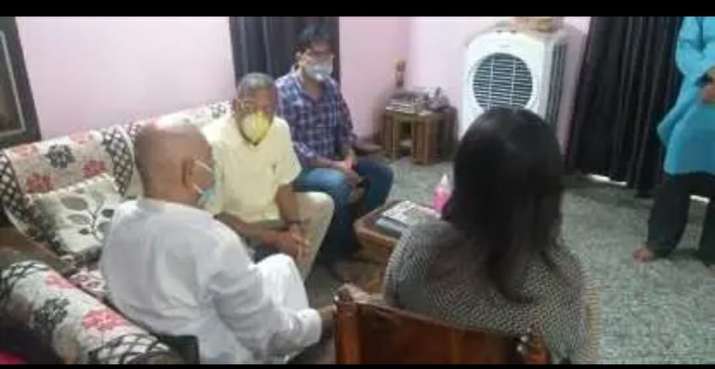 Nana Patekar discussed his Sushant Singh Rajput’s work with the family and said that he had immense potential.

After meeting Sushant’s family, Nana Patekar left for the airport directly. During this time, he kept a distance from the media. Nana Patekar reached the CRPF Training Center at Mokama Ghat in Patna on Saturday where he interacted with villagers and trying his hands at a plow driven by oxen, before taking part in a cultural programme organized by a central paramilitary force. According to sources in the CRPF, which had invited the national award-winning actor to the function held here, about 100 kms from the state capital, Patekar had reached Patna by air on the previous night and drove to Mokamah in the morning.

Earlier, Bhojpuri stars Manoj Tiwari and Akshara Singh visited the late actor’s house to offer their condolences to the family.

Meanwhile, Sushant Singh Rajput’s family still has not come to terms with his death, said producer Sandeep Ssingh, who says he shared a decade-long friendship with the late actor.

“A father has lost his son and sister has lost her brother. I don’t think they have still come to terms with the fact that he is no longer with us. They still don’t speak much. They are still crying and are still in pain. They are completely shattered,” said Ssingh, who was one of the first to reach Sushant’s home along with actor Mahesh Shetty when the news broke out.

Sushant Singh Rajput was known for films like MS Dhoni: The Untold Story, where he played the titular role, Byomkesh Bakshi and Chhichhore.

Sushant’s final film, Dil Bechara, will get a direct-to-digital release on Disney+ Hotstar. The film marks the directorial debut of casting director Mukesh Chhabra and is an official adaptation of John Green’s novel The Fault In Our Stars. Sanjana Sanghi will make her debut in a leading role with the film. It also features a cameo by Saif Ali Khan.

(With Inputs from Nitish Chandra)

Saudi government employees to return to work from August 30